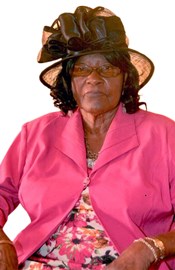 Posted at 14:40h in Uncategorized by Ian Griffith 2 Comments

Great Aunt of Kara and Kirk Edwards, Kentley and Renaldo Mahon, Gregory and Nicholas King (both of the U.S.A.).

Relative of the Mahon, Bovell, Welch and Rock families.

The funeral of the late Gloria Delores Gibbs leaves Earl’s Funeral Home, Half Moon Fort, St. Lucy, on Friday, October 20th at 2:00 p.m. for All Saints Anglican Church, Pleasant Hall, St. Peter where relatives and friends are asked to meet for the Service of Thanksgiving and the Interment at 4:00 p.m.  The organist and choir are kindly asked to attend.

Relatives and friends can visit in the chapel of Earl’s Funeral Home, Half Moon Fort, St. Lucy to reflect the memories of Gloria Delores Gibbs from 4:00 p.m. to 6:00 p.m. on Thursday.

Floral tributes may be sent to Earl’s Funeral Home no later than 1:30 p.m. on Friday.