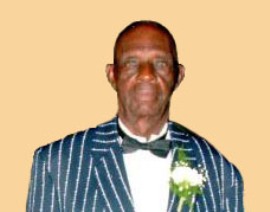 Posted at 13:14h in Uncategorized by Ian Griffith 0 Comments

Son of the late Wesley Henry and Carlotta Scantlebury.

Step-father of Natalie Sargeant and the late Gladstone Wilson.

Brother of the late Elsie Drayton-Firebrace, Esterline Small, Lionel and Kenneth Henry and others.

Brother-in-law of Archibald Wilson and others.

The funeral of the late Urban Sylvester Drayton leaves Earl’s Funeral Home, Half Moon Fort, St. Lucy, on Friday, April 5th at 12:30 p.m. for St. James Parish Church, Church Point, St. James where relatives and friends are asked to meet for the Service of Thanksgiving at 2:30 p.m.  The funeral will then proceed to St. James Cemetery for the interment.  The organist and choir are kindly asked to attend.

Relatives and friends can visit in the chapel of Earl’s Funeral Home, Half Moon Fort, St. Lucy to reflect the memories of Urban Sylvester Drayton from 4:00 p.m. to 6:00 p.m. on Thursday.

Floral tributes may be sent to Earl’s Funeral Home no later than 12:00 noon on Friday.