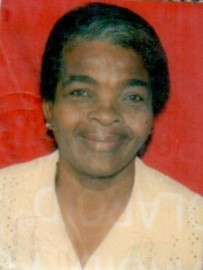 Posted at 20:08h in Uncategorized by Ian Griffith 0 Comments

Mother of Selwyn and Davidson Bowen. Grandmother of Davion Roach.  Sister of Velda, Oscar and Rudolph Bowen.  Aunt of Jefferson Bowen.  Cousin of Rollins Skeete, Marcelene Benn and Diane Bovell.  Relative of the Jordan family (Goodland, St. Michael), Bowen families and many others. Friend of many.

The funeral of the late Reatha Evadnie Bowen leaves Earl’s Funeral Home, Half Moon Fort, St. Lucy, on Thursday, October 10th at 12:30 p.m. for The Community Berean Bible Baptist Church, #82 Sixmen’s Development, St. Peter where relatives and friends are asked to meet for the Service of Thanksgiving at 2:30 p.m.  The funeral will then proceed to St. Peter’s Cemetery for the interment.

Floral tributes may be sent to Earl’s Funeral Home no later than 12:00 noon on Thursday.