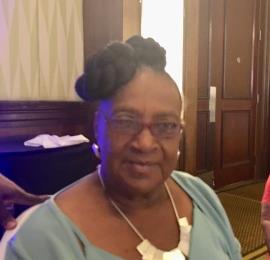 Posted at 14:29h in Uncategorized by Ian Griffith 2 Comments

Daughter of the late Beresford and Miriam Coggin.

Grandmother of  Jamar, Cheriece and Kristal.

Aunt of Jennifer, June, Anthony (all of the UK), William, Jan, Norman, Bernard and Edward

Great Aunt of Lana and James and others in the U.K

Relative of the Browne, Griffith, Yearwood and Coggin families.

Dearest friend of Sandra Cumberbatch , Bishop Cameron Nichols, Glendine  Weekes, Undine Whittaker, the 55 and Up Club and many others too numerous to mention.

The funeral of the late Patricia Euralene  Browne nee Coggin  leaves Earl’s Funeral Home, Half Moon Fort, St. Lucy, on Saturday December 28th  at 8:00 a.m. for St. Lucy’s Parish Church, Near Nestfield, St. Lucy where relatives and friends are asked to meet for the Service of Thanksgiving and the interment at 10:00a.m.

The body of the late Patricia Euralene  Browne nee Coggin will repose for viewing in the Chapel of Lyndhurst Funeral Home, Passage Road, St. Michael from 4:00 p.m. to 6:00 p.m. on Friday.

Floral tributes may be sent to Earl’s Funeral Home no later than 7:30 a.m on Saturday.