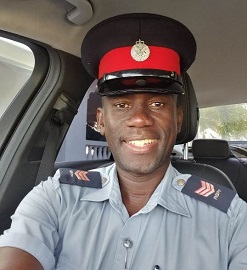 Posted at 16:42h in Uncategorized by Ian Griffith 8 Comments

Father of Kimberly and Keshad Eastmond, Luann and Nathan Lewis.

Brother of Seon and Matthew Lewis and Kim Rock.

Uncle of Kianna, Antoine and Hailey.

Son-in-law of Lloyd Downes and the late Judith Greene.

The funeral of the late Newton Carmichael Lewis leaves Earl’s Funeral Home, Half Moon Fort, St. Lucy, on Tuesday, June 8th at 12:30 p.m. for The Chapel of Mount Pleasant Memorial Gardens, Pleasant Hall, St. Peter where relatives and friends are asked to meet for the Service of Thanksgiving at 3:00 p.m.  The cortege will then proceed to Casuarina Lawns for the interment.  Full military honours will be accorded.  Tributes will commence at 2:00 p.m.  NO Mourning Colors Preferably Green or White can be worn.  Live streaming can followed via the link  https://youtu.be/JUgypl3nnil

The body of the late Newton Carmichael Lewis will repose for viewing from 3:00 p.m. to 6:00 p.m. on Monday at The Police Sports Club, Weymouth, Roebuck Street, St. Michael.

Floral tributes may be sent to Earl’s Funeral Home no later than 11:45 a.m. on Tuesday.

Strict COVID 19 protocols will be in effect.