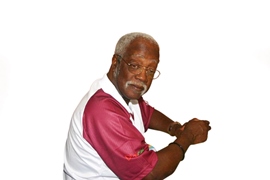 Posted at 14:22h in Uncategorized by Ian Griffith 4 Comments

Son of the late Belfield and Ettalene Holford

The funeral of the late Kelvin Halverston Holford leaves Earl’s Funeral Home, Half Moon Fort, St. Lucy, on Tuesday, December 19th at 10:00 a.m. for Coral Ridge Crematorium, The Ridge, Christ Church where relatives and friends are asked to meet for the Service of Thanksgiving and Cremation at 12:00 noon.

Relatives and friends can visit in the chapel of Earl’s Funeral Home, Half Moon Fort, St. Lucy to reflect the memories of Kelvin Halverston Holford from 4:00 p.m. to 6:00 p.m. on Monday.