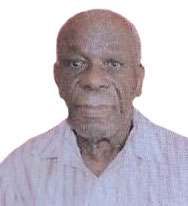 Posted at 14:09h in Uncategorized by Ian Griffith 2 Comments

Brother-in-law of Christopher, Esme and Velma Burnett and Trevor Edwards.

Relative of the Burnett, Gill, Springer and Alleyne families.

Friend of Morgan and Pearline Greaves, Rhonda Hinds-Graham, Sherwin Phillips and Pastor Odle and many others.

The funeral of the late Irvin Desmond Gill leaves Earl’s Funeral Home, Half Moon Fort, St. Lucy, on Tuesday, April 16th at 1:30 p.m. for St. Clement’s Anglican Church, Near Lowlands, St. Lucy where relatives and friends are asked to meet for the Service of Thanksgiving and the interment at 3:30 p.m.  The organist and choir are kindly asked to attend.

Relatives and friends can visit in the chapel of Earl’s Funeral Home, Half Moon Fort, St. Lucy to reflect the memories of Irvin Desmond Gill from 4:00 p.m. to 6:00 p.m. on Monday.

Floral tributes may be sent to Earl’s Funeral Home no later than 1:00 p.m. on Tuesday.